Hello, hello! Happy Friday, friends 🙂 It’s a pretty gloomy day here, but that doesn’t change the fact that it’s the weekend – so I’ll take it!

I’m surprised that I even remembered what to do when I got to the gym this morning. It feels like it’s been 10 years since I’ve been. I did this strength circuit and spent a very sweaty 25 minutes running on the treadmill. I’ve read that if you do intervals, you don’t have to stay on  the treadmill as long compared to a one-speed run.

If that’s not true, please don’t correct me.

Two very scary things happened this morning in regards to my favorite meal. #1 – I had no milk or cereal in my possession. #2 – Giant was out of Quaker Oatmeal Squares. I went ape shit and knocked cereal boxes off the wall in hopes that one solitary Quaker Oats box was hiding amongst the granola and Kashi – but no such luck.

I had to resort to Puffins.

Don’t get me wrong. Puffins were my jam during my freshman year of college. But I think I ate them one-too-many times, if you knowwaddaImean. Now I just smell my old dorm when I eat them.

The only thing that helped mend my broken heart was the fact that Foods Alive sent me some fantastic products to try out – chia seeds being one of them. They made an appearance in my poor-man’s cereal combo and really stole the show.

They sent me some of their flax crackers and raw peanuts as well! 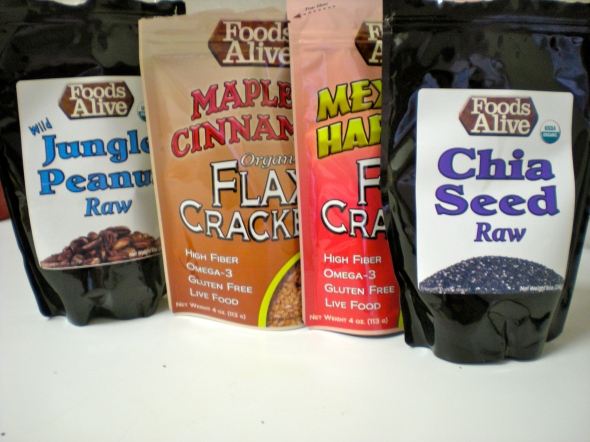 I opened the Maple Cinnamon crackers as soon as I got my paws on them, and they were delicious. The peanuts were unlike any peanuts I’ve ever tasted – maybe because I’ve never had raw peanuts? I’d be lying if I said I like my peanuts sans salt, but these were good and healthy-tasting. I think I’ll be making them into peanut butter soon! 🙂

Alrighty, friends! I am now getting into research mode to find cute and exciting wedding reception decoration ideas. If you have any, send ’em my way! Have a great Friday! I’ll catch ya later 😉

Hi, I'm Colleen! I'm a busy 23-year-old with passions for healthy living, fitness, writing and enjoying life! This blog follows my life as I earn my MEd in Counseling, work, plan a wedding, and enjoy good food and sweaty workouts! I love to hear from readers, so if you have any questions or comments, please feel free to email me at lunchboxdiaries@gmail.com